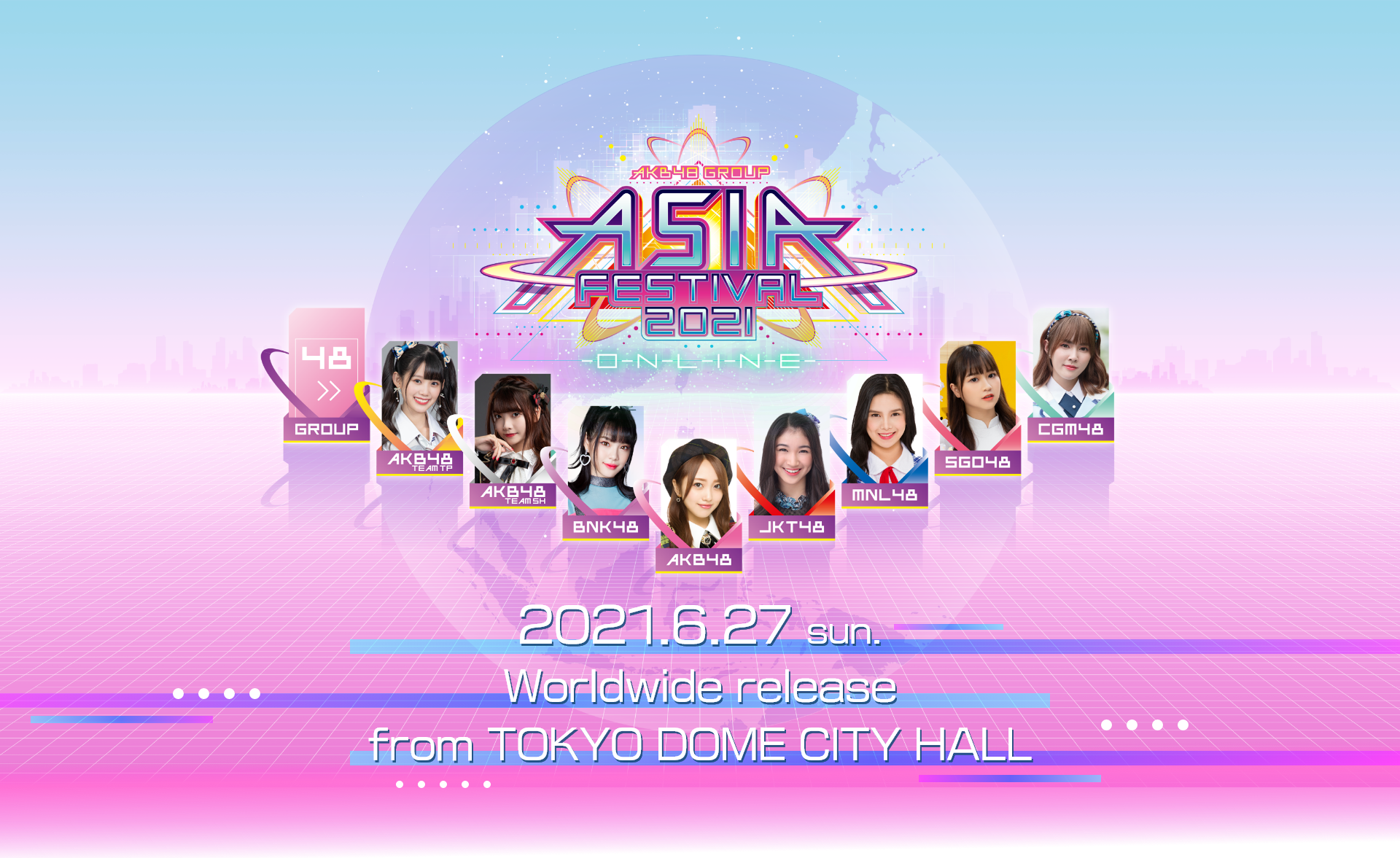 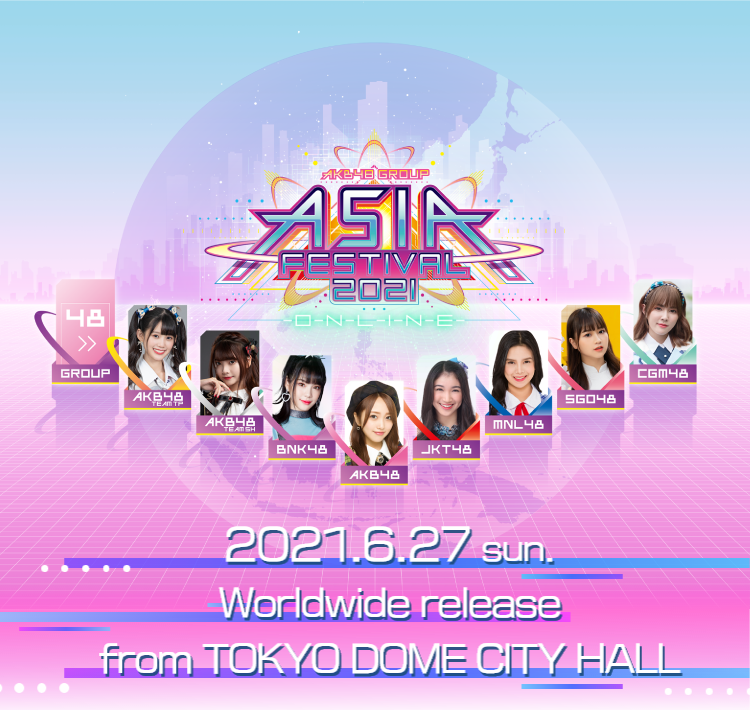 ＊Its possible for all customer to enjoy XR live streaming at all platforms.

Online and offline mixed event featuring AKB48 overseas sister group, joining together at once.
AKB48 Group Asia Festival was held for the first time in Bangkok back in January 2019. The same year on August 24th, the second event「AKB48 group Asia festival in Shanghai」was hosted in Shanghai, both events were accoladed, and welcomed with success, because the sister groups united together for the first time in the history of AKB48 groups.

Since the event in Bangkok, The festival in Shanghai was further upgraded, the staging was focused on showcasing the culture of each group, and the event was well received and appraised by the fans.

This coming third event on June 27th, 2021 Tokyo is featured as the center of the event and will act as a virtual performing stage, all sister groups including AKB48 will unite at once to perform from theaters, online and special venues across Asia.

The one main characteristic of this festival is the implementation of the XR technology, which is unique to online staging. Now the festival can be enjoyed and experienced in many ways, allowing fans from all around the world to interact with the contents.

The festival is one of a like, held all over cities at once mixing online and offline activities where fans can participate at some of the real venues hosted by our sister group.

Pre and post-event features live broadcasts and exciting attractions, with contents that will allow you to enjoy a new experience with members after the main event.

We are set to send the world a new whirlwind from the Idols of AKB48, the only group in the world that is developing worldwide.

"Idols you can meet"

An idol group that started its activities in December 2005. The concept is "Idols you can meet", and a major specialty of the AKB48 project is that fans can share the process and joy of the growth of their Idols.

AKB48 have their own "AKB48 Theater" in Akihabara, Tokyo, and perform a daily routine of acts centered on singing and dancing, as well as media appearances, CD releases, concerts, handshake events, and other interactive events for the fans.
The lyricist Yasushi Akimoto is the main producer.

The members are selected from auditions, with entries from all over the country, and currently consist of 5 teams (Teams A, K, B, 4, 8) and underclass students. Currently, 100 members are enrolled in total.

When the single CD is released, the chosen "Senbatsu members" selected from the group members can sing the title song.

41 consecutive singles ranked No 1 and 35 singles reached million-seller hits consecutively. The total number of single CDs and album CDs sold has exceeded 50 million, growing consistently and rewrote the history of the Japanese music world one after another, becoming an idol group that represents Japan.

AKB48 has a track record of performing concerts and events not only in Japan but also in various countries and regions such as New York, Los Angeles, Cannes, Paris, Moscow, Macau, Seoul, Taipei, Bangkok, Manila, and is popular especially in Asia.

As a sister group of AKB48, SKE48 in Nagoya, NMB48 in Osaka, HKT48 in Fukuoka, NGT48 in Niigata, and STU48 in the Setouchi area all work under the umbrella of the AKB48 project in Japan.

For overseas, starting with the birth of JKT48 in Jakarta in 2011, BNK48 in Bangkok, MNL48 in Manila, AKB48 TeamSH in Shanghai, AKB48 TeamTP in Taipei, and SGO48 in Ho Chi Minh, CGM48 in Chiang Mai were born one after another.

Music brings us together

Invitation to a trip to Chiang Mai